The history of the zsolnay factory
overview

In Pécs in the 1850’s a ceramics factory, employing just a handful of people was established. The owner was the son of the respected Zsolnay family, Ignác, from whom the management of the factory was soon taken over by his brother, Vilmos. Vilmos Zsolnay succeeded in turning it into a high-quality factory in just a very short period of time.

Vilmos Zsolnay, who had painting ambitions, but became a businessman to follow his father’s wishes, started producing ceramics in the middle of the 19th century at the age of 25, with no previous experience. Not only de he have excellent taste and a great head for business, but he was also very receptive to technical innovations. His dedicated work was supported by his extended family, children, sons-in-law, later grandchildren, along with well-known contemporary artists, painters and sculptors, who regularly made designs for the factory.

The different decorative objects of the Zsolnay factory enjoyed overwhelming success from the 1870’s, and soon won several awards at world exhibitions. Their masterpieces were not only popular and sought-after in Hungary, but also abroad. Some of the luxury items, decorative objects, and sculptures were produced for the foreign market; their products fitted into the bourgeois environment of the time, making their way to Austria, England, Germany, France, America, Japan, India, and even Australia. 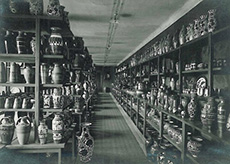 Zsolnay ceramics are now among the most valued pieces of museums and private collections all over the world; only the most fortunate collectors can purchase items they desire on the Hungarian and the international market at a very high price.

The work of enthusiastic art historians and collectors researching Zsolnay ceramics is facilitated by the fact that almost the entire documentation of the factory has been retained; the written documents, design plans, sample sheets and books containing forms and decorations.

The factory survived both World Wars, and remained in the ownership of the Zsolnay family until 1948, when it was nationalised.

This site uses cookies. By continuing to browse the site, you are agreeing to our use of cookies.

We may request cookies to be set on your device. We use cookies to let us know when you visit our websites, how you interact with us, to enrich your user experience, and to customize your relationship with our website.

Click on the different category headings to find out more. You can also change some of your preferences. Note that blocking some types of cookies may impact your experience on our websites and the services we are able to offer.

These cookies are strictly necessary to provide you with services available through our website and to use some of its features.

Because these cookies are strictly necessary to deliver the website, refuseing them will have impact how our site functions. You always can block or delete cookies by changing your browser settings and force blocking all cookies on this website. But this will always prompt you to accept/refuse cookies when revisiting our site.

We fully respect if you want to refuse cookies but to avoid asking you again and again kindly allow us to store a cookie for that. You are free to opt out any time or opt in for other cookies to get a better experience. If you refuse cookies we will remove all set cookies in our domain.

We provide you with a list of stored cookies on your computer in our domain so you can check what we stored. Due to security reasons we are not able to show or modify cookies from other domains. You can check these in your browser security settings.

We also use different external services like Google Webfonts, Google Maps, and external Video providers. Since these providers may collect personal data like your IP address we allow you to block them here. Please be aware that this might heavily reduce the functionality and appearance of our site. Changes will take effect once you reload the page.